Since 2013, the Power Station of Art has set “architecture and space” as an important academic research direction, presenting thematic exhibitions, symposiums and practice projects each year, and meanwhile preparing to establish an architecture document database. Piece by Piece: Renzo Piano Building Workshop is the second large-scale exhibition of this project, and also the first retrospective of this Pritzker Architecture Prize winner in mainland China. This exhibition not only explores the relations among material, structure, atmosphere and inhabitants, but also manifests the inexorable process of this master architect setting out from Milan modernism, exceeding traditions, infinitely approaching precision and freedom of poem. It’s believed this exhibition would bring enormous enlightenment and inspiration to young Chinese architects.

As Piano’s first China solo, the exhibition will be divided into five sections : “Beginning with building: lightness in construction” “The lightweight, intelligent city” “Project in China” “Places of culture, spaces for art” “Architecture for music and silence”, taking advantage of direct visual forms, including building models, sketches, illustrations and videos, to present 27 of the architect’s well-known masterpieces. Each model, sketch and display functions like a piece of jigsaw, to rebuild the master’s growth and transformation. Through the pieces, the architectural world of Renzo Piano Building Workshop starts to get clear and complete. The exhibition not only explores the relations among material, structure, atmosphere and inhabitants, but also manifests the inexorable process of this master architect setting out from Milan modernism, exceeding traditions, infinitely approaching precision and freedom of poem.

①Beginning with building: Lightness in construction

At the beginning there's the pleasure of building, an interest in concrete things: the passion and the sheer fun of constructing small or large buildings, piece by piece; the invention of prototypes, the trying out of new materials, learning about their potential and their limitations. When it comes down to it, transforming materials is the first step to transforming the world itself.In Italy, we use the word 'costruttore', but English has a nicer term: 'master builder'. A master builder is someone responsible. He is authoritative, a man focused on his work who invents something new every day and then builds it with his own hands.

Then there's the search for lightness, the idea of constructing something weightless, if you will, the idea of designing with immaterial elements such as lightness, transparency, light and its vibrations, shadows, or sounds. Used together, these elements can contribute to defining a space in much the same way as shape and volume do.Architects should always experiment. And to increase their level of independence they should also design the tools they work with. All of this is tied in with the noble idea of the master craftsman and building with integrity. A construction site is an extraordinary universe, always in movement, where new discoveries are constantly being made, a place of invention where problems can be prioritised so that decisions can be made.

Even when designing a large-scale, complex building, the initial impulse is a study of the construction process. This is not an afterthought, not something considered only after the building's form has been conceived, like fake scaffolding supporting a pre-conceived idea or finished shape. In fact, this image of the architect-builder, the architectinventor remains an image which deep down corresponds to the mythical figure of Homo faber, or 'Man the Creator'.

The main concern of our work as architects is the city itself. Cities are one of mankind's brilliant inventions. They are civilised, an exercise in tolerance, where differences cohabit. Cities are dense constructions, shared places of close contact, of a healthy sort of contamination.Perhaps, as designers, our most important task is as Italo Calvino wrote to "make lasting, and give space... to the welcoming place that exists, and always has, in every city, even in the most difficult of urban contexts". It's a risky proposition which "demands your attention and constant self-improvement." It means listening to the places themselves and hearing all their voices, including the quieter ones.

Cities constantly evolve and although over the course of history this has happened fairly gradually, after the Second World War, change accelerated, spurred on by the idea that perhaps there were no limits to growth. However, the limits of this development model have been evident for some time now and today it has become abundantly clear that the task of architecture is to confront, with a light, yet determined intelligence, the fragilities of our world.

Any sustainable architectural project is an act of exploration, it is a dialogue with a site and should not be nostalgic even when dealing with historic city centres. The Otranto district workshop was a formative experience, the raising of a collective awareness of the town's delicate, but fortunately responsive, ancient fabric. This project holds up as a prime example of careful planning which, as it progressed and increased in scale, also affected the city's outskirts in terms of the strategic and pressing need to recover the vast urban void inherited from the deindustrialization processes of the recent past.

③Architecture for Music and Silence

Simply stated, architecture can be defined as a service, an art that produces objects that serve a function. An architect's task is to hold on to the identities of places and objects, and be honest about their functions: we must never forget what the building we are constructing is actually meant to do.But architecture is also the art of understanding the emotion of a space. Through architecture we can create spaces for music and spaces for silence, for meditation. Although you might associate silence in architecture with sacred places, it also has a secular value that corresponds to society's need for places to gather and share in silence. Concentration is a fundamental condition that allows us to understand the essence of a space and of works of art.

Of all the arts, music is the most intangible and architecture the most tangible. If you lack the talent to become a good musician, perhaps you might turn your hand to constructing spaces for music, like being a luthier on a grand scale! In creating a space for sound, you seek to define that space through sound, and then design it. And this is another way of rendering visible something that is intangible. It's a fascinating theme that we have spent a great deal of time exploring, starting with the experiments we conducted at the Paris IRCAM and the musical space for Luigi Nono's Prometheus.Truth be told, there are many similarities between architecture and music. Both use technique in a virtuoso manner and both consist of logical and structural mechanisms. Both music and architecture are constructed with meticulous care based on the laws of mathematics and geometry, a strict structure from which you can, maybe even should, deviate. And both feature vibration and colour as fundamental components.

④Places of Culture, Spaces for Art

Art and culture are both powerful forces in our society. They penetrate and affect our consciousness; they spark the imagination of those who come into contact with them. The idea that art can change the world, one person at a time, is a powerful one. Yet we should never forget that culture, and even more so, beauty, are fragile concepts which can vanish just as we grasp them.And if art through beauty, can have an improving affect on people, then buildings designed for art – museums, but also concert halls, libraries and cultural centres – can make cities into more interesting, more civilised and lively places. These buildings nourish a city, which derives energy from their coexistence in public places, their diversity of functions and activities, spontaneous initiatives involving discussion and exchanges.

Museums almost always make enthusiastic clients, visionaries, people with whom to share the adventure of a demanding project and often complex work site. By interacting with curators, the project takes shape and the exhibition spaces become inventive devices that serve both the museum's vision and control lighting levels.Culture and art should not be a privilege reserved for the elite. Beaubourg was amongst other things, a provocative gesture, the creation of grand architecture on an urban scale that managed to increase the amount of 'contact surface' between a cultural institution and the public, replacing the intimidating rigidity of a traditional museum with an open and dynamic space for art.

However, a museum is also a permanent place, somewhere with a long life span: it places art in a timeless dimension, so is light years away from being ephemeral! It is a protected place in which art is preserved and made available to us, encouraging us to reflect on the present and consider the future.

When he completes the new Whitney Museum of American Art in south Manhattan, which opens in 2015, Piano will finally turn his attentions to China. He is building in Hangzhou, one of the cultural capitals of the former empire, in an area of the city devolved to fashion group JNBY ('Just Naturally be Yourself') launched in 1994 by Li Lin. An urban and civic project, JNBY's headquarters are laid out in a series of buildings around a large central space. The buildings are transparent and meet the environmental standards that are imposed in China. The group of buildings is a bit like an enormous version of the Square des Bouleaux (Rue de Meaux apartments) built in Paris in 1992. For the architect, the buildings are more similar to the Central St Giles project, completed in 2010 in Covent Garden, London – a project where colour rules.

The Renzo Piano Building Workshop regularly organises retrospectives of its work. The principal is always the same: large tables which could be work spaces, on each of which RPBW's projects are presented with books, models and drawings. The visitor is invited to take a seat and 'work', that is to say to learn how Piano's architecture comes about. Above the tables, depending on the height of the gallery where the exhibition is held, big photographs show large-scale details of the projects. Always similar yet always new, the exhibition presentation is meticulously planned, to appeal both to members of the public and fellow professionals and students. It has as a title, this year at least, Pezzo per Pezzo ('Piece by Piece'). The last of these pieces has taken Piano to China, to Shanghai, to a former thermal power station, converted into the Power Station of Art (PSA), where the RPBW exhibition finds an ideal home. Although well known in universities and architecture schools, Renzo Piano, despite his Pritzker prize in 1998, has remained in the shadows in China. Clients tiring of a certain kind of architecture should find something here to comfort them.

Renzo Piano was born into a family of builders in Genoa, in 1937.He graduated from Politecnico di Milano in 1964, and during his studies he worked with Franco Albini. He has collaborated with Richard Rogers from 1971 (Piano and Rogers), and with Peter Rice from 1977 (Atelier Piano & Rice).

In 1981, he established “Renzo Piano Building Workshop”, which currently employs 150 staff and has offices in Paris, Genoa, and New York.

RPBW has designed buildings all around the world: the Menil Collection in Houston, the terminal for Kansai International Airport in Osaka, the Jean-Marie Tjibaou Cultural Centre in New Caledonia, Potsdamer Platz in Berlin, the Nasher Sculpture Center in Dallas, the extension the Morgan Library in New York, the Maison Hermès in Tokyo, the New York Times headquarters, the California Academy of Sciences in San Francisco, the Modern Wing of the Art Institute of Chicago, the rehabilitation of the Ronchamp site, the London Bridge Tower (The Shard) in London, the expansion of the Los Angeles County Museum of Art, the Isabella Stewart Gardner Museum in Boston and the Kimbell Art Museum in Fort Worth, Texas.

He has received numerous awards and recognitions including: the Royal Gold Medal, 1989; the Goodwill Ambassador of UNESCO, 1994; the Praemium Imperiale, 1995; the Pritzker Architecture Prize, 1998; the Gold Medal AIA, 2008.

In September 2013 Renzo Piano was appointed senator for life by the Italian President Giorgio Napolitano and in May 2014 he received the Columbia University Honorary Degree. 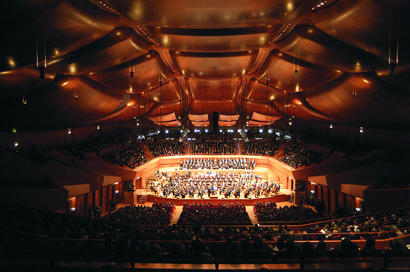 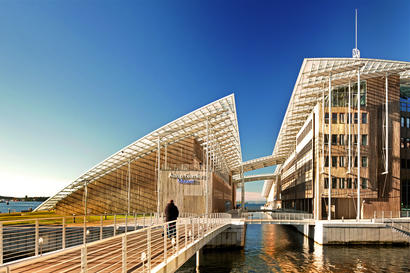 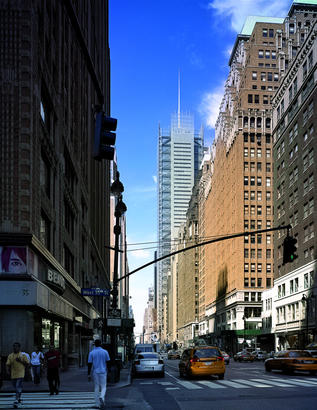 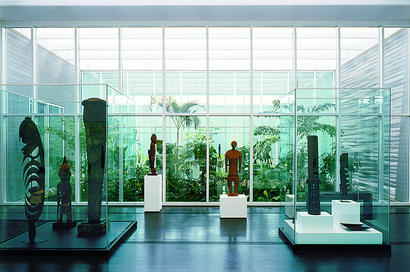 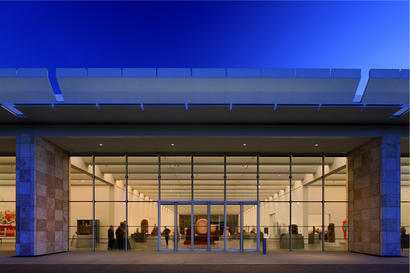 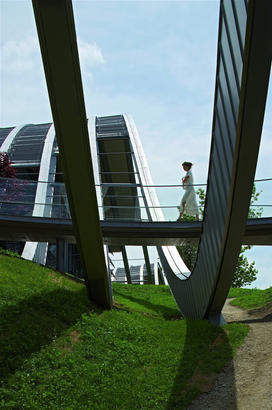 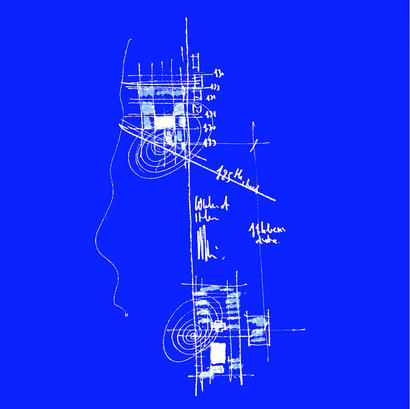 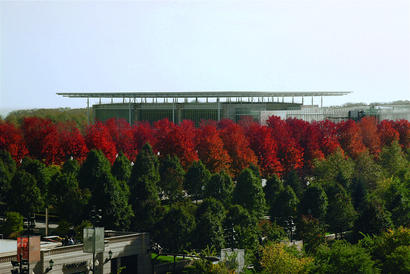 The Art Institute of Chicago – The Modern Wing 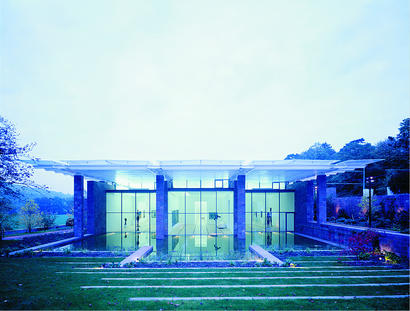 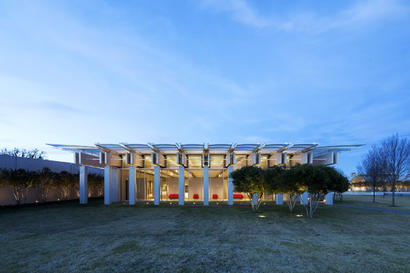 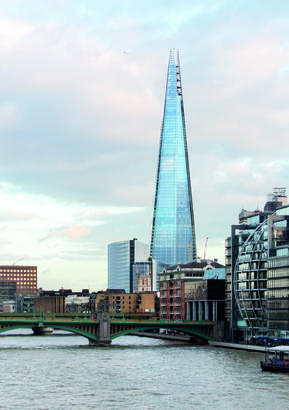